Not All Who Wander… 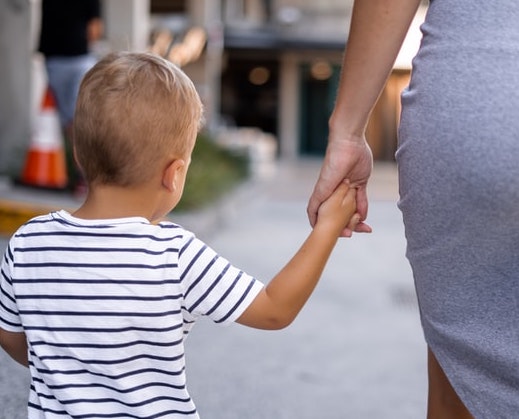 The warm spring day was getting warmer, and our energy for a day at a local amusement park was beginning to wane. Our three boys began to complain they were hungry, so we made our way toward the exit, in search of the promised picnic tables. As we went, I counted, as was my habit. “One, two, three,” I counted to myself, making sure all three of them were still with us.

A park employee directed us to the gift shop (why, oh why, is the path always through the gift shop??), where we navigated the aisles of snow globes, sparkly battery-powered fans, and fairy wings in search of a door that led to the parking lot. It lay straight ahead, and we hurried toward it, Ken with the boys in tow, and me tagging along with the stroller that held our baby daughter and the cooler with our lunches.

The picnic tables looked like they had been an afterthought. They were laid out in a corner of the parking lot marked off by ropes that would certainly keep cars out but not keep little children in. With one eye on the kids and the other on our table, I laid out the sandwiches, chips, apple slices, and cookies. And, a coveted bonus for the day, juice boxes. Ken corralled the kids and we gathered around the table.

I looked at them and frowned. “Where’s Spencer?”

We scanned the nearby tables and cordoned-off picnic area. There were kids everywhere, but Spencer wasn’t among them. A mother’s worst fear—losing her child. Our sandy-haired three-year-old readily charmed strangers with his sunny personality, and I become more frantic as I searched.

Had he escaped to the larger parking lot where cars were constantly entering and exiting? Had he wandered around the corner, behind the building that housed the gift shop? While Ken stayed with the other boys and searched the picnic area, I scooped up our baby daughter and retraced our steps to the gift shop. Could it be that Spencer had never come outside with us and I hadn’t noticed?

As I reentered the gift shop, my heart thudded in my chest and my eyes scanned everywhere at once for a glimpse of a blue and white striped shirt. All at once, I heard a familiar little voice. “A sparkly wand,” the voice narrated, “with feathers!”

I followed the voice and caught sight of Spencer wandering dreamily down the next aisle, touching everything that glittered—gem-encrusted princess crowns, fairy wands trimmed with ribbons and feathers, and tiny hand mirrors and hairbrushes bedecked with sparkles.

“Spencer!” I exclaimed, trying not to sound as frantic as I felt.

I ignored the pink teddy bear in his hands. “Spencer, I’ve been looking for you! You were supposed to stay with us!”

“Oh,” he said agreeably, setting down the bear and tucking his small hand into mine. I pulled him toward the door, and as he walked, he glanced back longingly toward all that glitters.

Spencer is still the child most likely to take in the scenery. He lingers over beauty and has gotten lost more often than all of our other kids combined. But he also reminds me that I have a choice about how to walk through life: hurry by without a sideways glance on my way from one place to the next, or stroll through and enjoy the beauty around me. It takes a little longer, but delights abound.